All That Sparkles Isn't Gaul 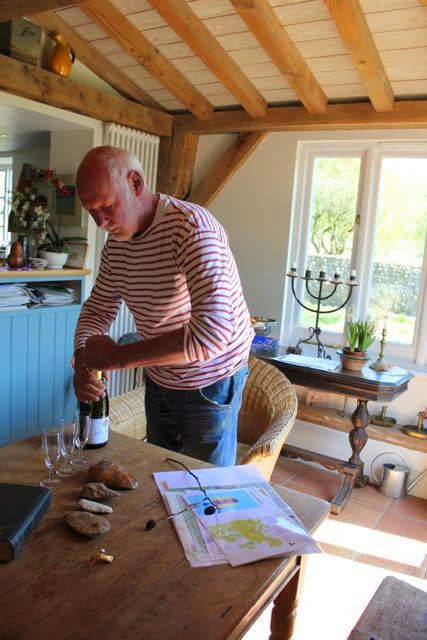 Peter Hall places the ruddy chipped stone on the oak table.  Light through the Sussex cottage window illuminates the flint ax, his white ruff of beard, and the blue-eyed Bengal cat.

Fine bubbles subduct in golden liquid while he waits.

I’m off by 270,000 years.  He points to a tiny catalog number on the side.  “The Sussex Archeological Society wanted it, but it belongs here.” Hall exhumed the Pleistocene spearpoint when he carved Breaky Bottom Vineyard out of chalk and flint in the 1970s. Chalk-- the porous, eminently drainable soil that connects the South Downs with the Champenoise. Flint to warm the roots. Hall’s French mother helped cultivate his palate early, and it’s paying off, as Peter patiently ferments, sniffs and riddles his way to world attention. Fame he dismisses with a Gallic shrug. “I just do what I care to. Every day.”

Offer almost anyone a choice between an English bubbly and a vintage Cristal, and they’ll laugh.  Until they taste what judges at the 2010 World Sparkling Wine championships in Verona hailed as “a fine mousse, notes of lemon zest, shortbread and apricot. Well balanced.” Nyetimber’s 2003 West Sussex Classic Cuvee trounced 50 contenders, including offerings from venerable Bollinger and Louis Roederer -- selling at ten times the price.

Was this a warm summer fluke, or can the stealthy English sparklers sustain their explosion onto the global wine scene?

Perhaps the answer lies buried in the dirt. Driving south from London, I navigate over Kipling’s “bow-headed whale-backed downs” to suss out the secrets of the small winemakers with big aspirations.

Scenic backroads twist through copses of oak and ash and tiny medieval villages--Ardingly, Ashcombe Hollow, Ditchling. Often the cobbled streets are just wide enough for a horse and haycart--I can stretch my arm out the window and touch the half-timbered houses. “Kill your speed,” the yellow and black signs buzz. I do. Mostly to admire the thatched-roof cottages and stone-studded pubs.  Grape wisteria flows over sandstone walls as 400-year-old churches glimmer with the glassy flint chunks that frame life here. An ancient castle keep yields views of hedgerows divvying up the rolling green like a giant’s chessboard. Along the way, I fuel my quest with Harvey’s Bitter and Ploughman’s Lunches of aged cheddar and chutney, but am hard pressed to find an eatery offering local wines.

English bubblies have only begun rising to the collective conscious. A clutch of southeast vineyards have garnered top awards at international juried competitions. And a fortunate few have joined Nyetimber in what most Brits would consider the highest accolade: a niche in the Queen’s wine vault.

Jancis Robinson, renowned oenophile and consultant to Her Royal Majesty, says, “While English production is still miniscule, about 1,000 hectares, this may be the moment English sparkling wines make their mark.”

Mike Roberts pours a glass of his 2006 Merret Grosvenor-- served at the Queen’s 80th birthday bash--and tells why he took the risk to start Ridgeview with his wife Christine. “We have the same soil, and a better climate for fizzes than the French—with more daylight hours to develop the delicate flavors. We don’t need to imitate --what we have here is all English.”

Bubbles release aromas of elderflower and new mown grass (or is that hedgerow?), while 16 acres of Pinot Noir, Chardonnay and Pinot Meunier bud outside the picture window. Last week the family was out all night lighting bugees--rusted tins with candles inside—against a late spring frost.

“An Englishman, John Merret, made wine sparkle in 1662 – thirty-five years before Pierre Perignon entered a wine cellar,” Roberts notes. Ridgeview trademarked “Merret” for their sparkling wines, hoping the moniker eventually earns the same cachet as the terroir reigning from France.

The joke still circulates that it takes four men to drink a glass of English wine: the victim, two to hold him, and one to pour it down his throat. What fuels the bad rap: British wine generally means high-proof, syrupy plonk. The grapes can arrive from Slovenia, and as long as they’re processed in the UK, it’s British wine. In contrast, English wines must be pressed from English grapes.

Yet homegrown makes up just 1% of the wine drunk here, and most upmarket restaurants still recommend Champagne or Prosecco to accompany their treacle tarts.


The upside of climate change?

Today close to 400 vineyards cascade over hillsides from Hadrian’s Wall to the Isle of Wight. In recent years, a warmer climate, and cross-fertilization with vintners worldwide has turned the tide to sparkling wine.

Robinson notes, “The French are nervous… they haven’t been getting the acidity they’d like.” No one wants to pop a cork to global warming, but the extra heat does appear to be helping English vintners -- and not for the first time. Native-grown wines have slaked the thirst of island inhabitants since the Romans first planted spears -- and vineyards -- here.

Professor of Geology and Earth Sciences at Imperial College London, Richard Selley explains, “Viticulture has thrived in Britain for most of the last two millennia. That is, until socio-political factors and the Little Ice Age in the 14th century cooled winemaking off a bit.” But now it seems the heat is rising in Britain again.

“Whether it’s the result of human activity since the Industrial Revolution, or a natural cycle, no one knows for sure. But a one-degree temperature rise will transform a marginally good grape growing climate into an optimum one. Seventy years from now, we may be growing Cabs by the Cuckmere River.”

Breaky Bottom and Ridgeview both lie within a flint pitch of the South Downs Way, the 100-mile chalk path drawn across the buoyant geography of East and West Sussex.  Walk it and your boots become dusted with the aeons. Stone Age burial grounds, Saxon forts, and signaling rings from WWII punctuate the rise and fall that once was the ocean floor.

I trek a short portion of the Way as lambs dodge across my path. A great English birthright guarantees foot access across land tracts. Fortunately for the untitled, even privilege can’t buy privacy here.

As I climb the last hill to Seaford Head, the Seven Sisters cliffs rise from the Channel, apparitions trailing white feet in waves.  On a well-placed bench, I offer a quaff of Breaky Bottom 2006 to a kindred hiker.  He accepts, and surprise crinkles his forehead. We muse on light radiating from chalk, a French connection and the warmth to come. 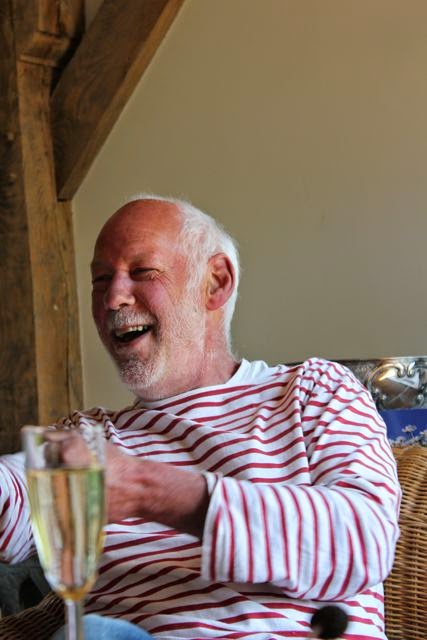 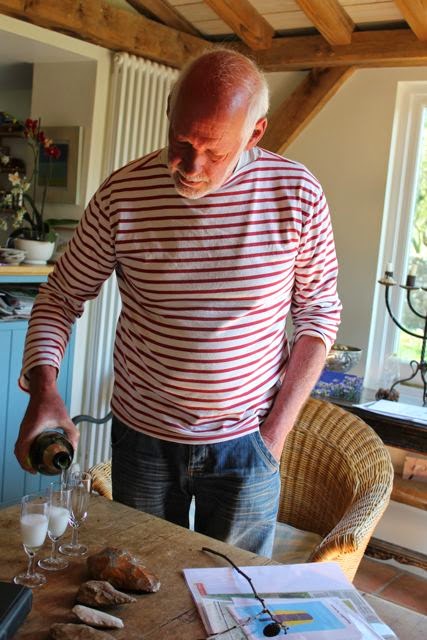 Posted by Kim Hamilton at 4:59 PM No comments:

The table of life

"Out of the chaos the future emerges in harmony and beauty."--Emma Goldman
Bopping our table mates with limp scallions while singing Dayeinu wasn't the only highlight of the Seder last Monday. It might have been the "sacrificial Yam," offered in deference to the many vegetarians crowding the makeshift dining hall in this 1920s Berkeley bungalow. Or the elevation of Miriam (the dancing girl that usually only merits a footnote), to her revered place as prophetess and conjurer of mysterious wells in the desert--who refreshed lagging spirits during years and years of dusty wandering.
Nearly half the 50 guests weren't Jewish, many were attending their first Seder, yet somehow all made to feel like family. The hostess, Candace reminds us that we are all on a perpetual journey of liberation with the earth's peoples. We move backwards and forwards through history as the songs of the Tunisian protestors, the 1911 shirtwaist factory protest, as well as the struggles of civilians in Gaza are remarked on by Judy, the officiant.
Karpas, maror, matzah-- Foods tell stories, as we work our way through bitter herbs soaked in tears to the apple and nut relish standing in for mortar used for rebuilding--we take the myth of hardship, flight and freedom into our bodies, into our own histories.
But mostly it was a love fest of self-described"over-the-hill anarchists," filmmakers, politicians, academics, midwives and prison wardens--celebrating the battles for truth and freedom they had joined in over the years. Recounting struggles, up to their necks in water on the way to the land of milk and honey.
And that was the sweetest moment of all, over macaroons and strawberries, seeing that after a lifetime of struggle, hope for liberation for all was still alive among the old lefties, in the old house in Berkeley. My husband and I drifted out feeling like it had been a reunion with people we'd never even met. With echoes of the Buddhist precepts that no one is free from suffering until everyone is, the refrain of tonight's haggadah followed us out the door and into the full moon's shadow.
"So that the next sea-opening is not also a drowning; so that our singing is never again their wailing. So that our freedom leaves no one orphaned, childless, or gasping for air."
Posted by Kim Hamilton at 8:39 PM No comments: